I had never been choked by anyone before.

Despite my penchant for binge-watching television for hours (translated: days) at a time, I’m a fairly active person. I enjoy playing recreational sports and going on hikes. But since I hate running and rarely go to the gym, I have generally maintained an “ok” physique — never really in shape, but not completely squishy.

After finishing grad school, I got a job sitting at a desk 40+ hours a week. My eating and drinking habits didn’t really change, but I didn’t think about how much more sedentary my life had become until my fat pants turned into my regular pants (and, to be honest, were quickly becoming my I-can’t-sit-without-unbuttoning-my-pants pants). Something had to be done.

In the spirit of achieving peak hotness (or, more like, reclaiming moderate lukewarmness), I decided to step out of my comfort zone and try different activities and classes to get back into shape. 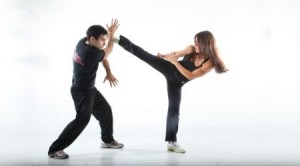 I’m not sure what motivated me to sign up for Krav Maga — I’ve ever felt the desire to fight and wrestle someone into submission — but I’m so glad I did because It. Is. AWESOME.

After a quick warm up and stretch, we learned a basic fighting stance and how to throw strong punches. We paired up with another person in class and took turns holding a pad for each other as we practiced our right and left jabs. (Note: I highly recommend wearing hand wraps or gloves to protect your knuckles from being rubbed raw!)

Next, we learned to kick our opponents hard in the groin. (As our instructor pointed out — the last thing you want to do is kick someone softly in the groin. You’ll just make them more mad without debilitating them, like kicking a bee hive!) We combined the punching with the groin-kicking, then learned how to leap quickly down on the ground and back up to avoid our opponent’s attacks.

After that, we learned how to get out of a basic choke hold (think Homer Simpson choking Bart) and how to immediately go back on the attack after releasing your neck from your opponent’s hands. We practiced with our partners by taking turns choking each other. At first it was pretty disconcerting to have someone’s hands around my throat, but learning to snap their hands away and to knee them in them stomach was seriously empowering.

By the end of the hour, my legs felt gelatinous and my shirt was completely soaked through with sweat. My arms were so tired that they were trembling as I tried to lift my water bottle to my mouth. I honestly can’t remember the last time I felt like I had worked out that hard. I felt invigorated but completely, totally, spent.

I can’t wait to go back.

If you’re looking to change up your work out routine or to learn some basic self-defense moves, I highly recommend tapping into your reserves of road rage and trying Krav Maga. Just make sure you don’t have any big plans to move your body much for a few days afterward.

Next time… It Hurts To Pee: How to Muffle Your Cries When Your Sore Legs Scream Out In Pain Every Time You Stand Or Sit.